Here we are going to discuss a copy of a string i.e. Copy One String To Another String Using a Pointer.

Because assignment operator takes the responsibility to assign from right value (rvalue to lvalue).

Now we are going to cover some common points –

What is a string?

A string is a sequence of characters which is accompanied by a null keyword (\0) at the end.

The above represents a string i.e., how a string is initialised.

This is how a string gets represented in a program, as said above it is terminated by a null by default.

What is a copy of a string?

When a content of one string gets copied to another string having the same or more dimension as the original string, is known as a copy of a string.

Through the help of string keywords or techniques to copy a string, the content of string s gets copied to string a and holds the same value. This process is known as a copy of a string.

How to copy one string to one another using a pointer?

The string gets copied through the following instruction:

Step-1: We take two string one string *str1 is declared as a pointer and the other str2 empty string.

Step-2: We take a separate function “copystring” where we pass the two strings which are initialised in pointer variables *a and *b in the function.

Step-3: A while loop is used which runs until the value of *a reaches ‘\0’ null, and the variable is incremented by one *a++ in each phase of the loop.

Step-4: In the body of the while loop as the loop goes on each character is extracted and is stored in another string variable *b as (*b++=*a++).

Step-6: Hence the second string str2 is printed to get the result of the copy operation.

Implementation Part of Above Explanation:

We can also use the string functions to copy the contents of the string and there may be different logics too. We have used a logic which supports the copy of strings successfully. 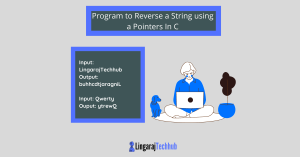 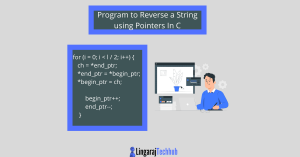 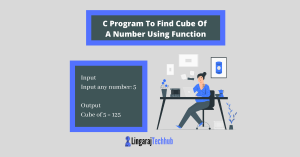